I triumphed (not D Trumped!!!!) over the weather forecast for the day, which was for cloud cover, and we enjoyed magnificent sunshine, wall-to-wall, all the way, just like last Sunday! And again, like on the last Meetup walk around Vartry resevoirs, the fabulous autumn colours of reds, yellows and browns treated us in their mighty splendour. It was an incredible endorphin releasing experience. You had to be there to enjoy the reality of it! Miguel’s photos are good but never as good as seeing the real thing!

23 of us set off from the outside the front gate of St Kevin’s Church in Laragh and we followed the Wicklow Way towards Glendalough on the forest paths of Brockagh Wood, passing, after a stop for a photo call, one of the bests views of the two lakes at Glendalough (there are a number of shots of this in Miguel’s album of the day – worth a look!). We continued past the turn for Glendalough and wound our way uphill, still on the forest track, until we came to the edge of the forest on the south west side of Brockagh mountain.

Having passed through a gate, we found ourselves on open ground but which was covered in dying, brown bracken. This was very spectacular but effectively disguised our path uphill to another corner of the forest but this was easily traversed by delegating the path finding to John Sweeny, who very ably guided us to our waypoint. What a navigator!

From this point we followed the forest line in a westerly direction for about 500m on a an obvious but narrow track through the heather. We then turned north, got past the thick heather and the going then became much easier over the turf surface. When we reached the main ascent path to Brockagh summit (556m), we followed this for about 500m to the west. This made the final ‘assault’ of the summit even easier, for most of us anyway, if not for all! The 360° views from the top of nearly all the Wicklow mountains was amazing given the beautifully clear visibility. However, perhaps we feasted on these views, as well as our refreshments, for a little too long, as some got chilled by the cool breeze, the only one we felt all day!

For the descent we retraced our steps, now easterly, for about 250m and then turned NE to descend though more thick heather to the forest which covered the Glenmacnass valley. We then followed the forest track back to the finish past the remains of the village of Brockagh East (1940’s). We covered the 11 kms in just under 4 hrs, a great walk in the very enjoyable company of people from every corner of the World! What more could anyone want!

We then adjourned to the Wicklow Heather for some superb soup to round off the day. 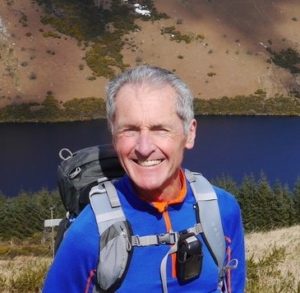